The Royal Society of Portrait Painters’ Annual Exhibition, a snapshot of portraiture today, is held at Mall Galleries. The 2016 exhibition was very popular with considerable press coverage and increased visitor numbers.   Six prizes were awarded to artists which were worth a combined total of over £20,000 See who won the top six portrait prizes. Many artists received commissions through this show. See which portrait artists received the most commissions enquiries.

2016 was a good year for celebrity portraits, with many well-known names on the wall including: 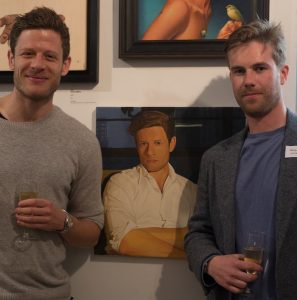 James Norton and Henry Bryne at the Private View of the Royal Society of Portrait Painters. Photo Hannah Burton

Will Self (broadcaster and novelist) 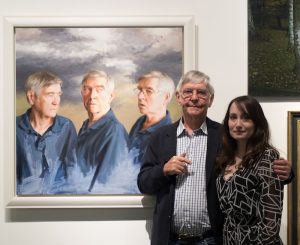 See if you can spot the celebrity portrait.

How the portrait exhibition is put together 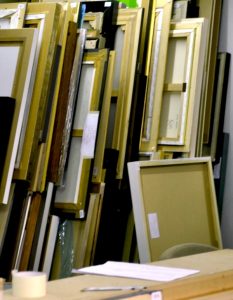 Portraits stacked prior to judging

It takes over six months to create this exhibition of portraits, and the portraits themselves may have taken years to create.

The exhibition is made up of two parts.  The first part consists of the of recent portraits by Members of the Royal Society of Portrait Painters (118 works). The second comprised the very best portraits drawn from nearly two thousand works from all over the world. These works are chosen by the eminent portrait painters who form the Council of the Royal Society of Portrait Painters.

The exhibited paintings from this second part, known as ‘The Open Section’,  have to get through a two stage process.   First the Council choose the outstanding works from among the portraits which had been submitted online, and then they invite the artists to bring the actual portraits to the Galleries for judging.  Only the very best of these get through.

To these are added some ‘Invited’ artists.  Each year some of the Members of the Royal Society of Portrait Painters will nominate an artist of promise to show a work. This year eleven ‘Invited’ works were shown.

This makes up the 120 works which formed an exhibition of 238 portraits by over 100 artists.