High Sheriffs in the picture

in conversation with three artists 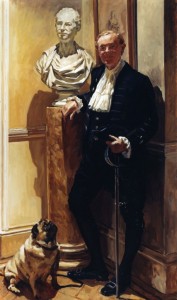 For those who are not familiar with it, the office of High Sheriff dates back to the 10th century with the height of its significance under the Norman kings. Nowadays, the role of High Sheriff is an independent, non-political, Royal appointment. Whilst the High Sheriff’s duties have evolved over time, their main role is representing the monarch in supporting the Crown and the judiciary.

Many of our member artists have painted portraits of High Sheriffs. We interviewed three of them:-

On speaking to these artists it became clear, from the off, that the role of High Sheriff is awarded to most personable and relatable individuals. The artists each emphasised how enjoyable these portraits had been to paint. Alastair had about five sittings with Sarah Furness, and by complete coincidence, it turned out that she lived in the next village to him:   He reported how they were ‘Really good fun’ adding  ‘She’s a great person to chat to and because we live in a similar area we have a lot in common; it was easy to find things to talk about.’ 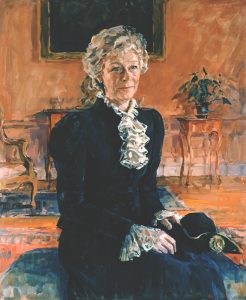 Similarly, although Susan hadn’t met Bridget before the commission, she felt that she got to know her well when staying with her, and during the sittings: ‘Painting a portrait is like a car journey with your subject, but you are facing each other rather than sitting side by side! I really enjoy talking and learning about my sitters when painting them- I like to multitask because I don’t become too conscious of the marks I am making; sometimes a moving and animated sitter is easier to capture because it allows you to get a better feel of the whole person.’

Of course, one of the most notable things about these portraits is the sitters’ ceremonial dress.The Regulation Court Dress worn in this role dates back to 1869, when only men were able to become appointed. Since then women have also become key members of the High Sheriff community and have introduced their own Court Dress. Both suits of ceremonial clothing now often feature in these portraits.

Whilst the numerous fabrics add texture, and detail might prove a challenge, the contrary seems to be true. For example, it is something that Susan really enjoyed… ‘I specifically remember the wonderful tricorn hat that Bridget had designed- I suppose the colour black, which isn’t on my palette, is more challenging though I find the warm and cool tones that emerge exciting’. Similarly, Richard reflected on the High Sheriff’s dress: ‘the outfits are good to paint, although sometimes lace can be tricky.’ 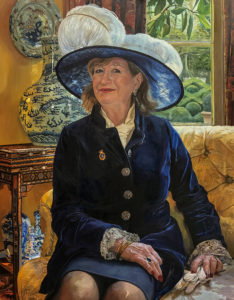 Alastair explained the complex process that went into trying to find ‘the perfect colour harmony’ between Sarah’s clothing and the background, concluding that, ‘something about the blue, yellow and green together really works…I like saturated colours and you know I am a fan of blue’. Susan also spent much time selecting her composition for Robert’s piece explaining ‘I used his dining room for the background because I like to have an interesting background seep into the foreground.’

Both taking advantage of the court dress and celebrating, and commemorating the role of High Sheriff are catalysts for a commissioned portrait. Robert Erith, for instance, had been Susan Ryder’s friend and neighbour and she had even previously painted their family portrait; however, it was only after he was appointed as High Sheriff that he plucked up the courage to ask her to paint a solo portrait of him. Similarly, Sarah Furness, having already commissioned a portrait of her husband, only approached the Royal Society of Portrait Painters about getting her solo portrait painted upon her appointment to High Sheriff.

All the artists interviewed enjoyed painting these sitters. High Sheriffs seem to make particularly good subjects not only because of the aesthetic opportunities provided by their distinctive dress but also because of their engaging personalities. Long may this lasting tradition continue.

Interviewed and written by Ellie Lachs