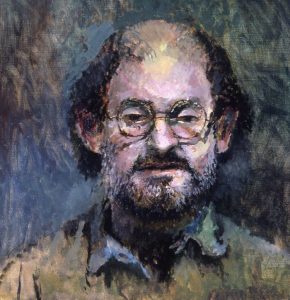 We recently caught up with member Tom Phillips to discuss some of his memorable portraits. Tom has painted many interesting people; from Samuel Beckett to Salman Rushdie. In 1989, Tom became only the second artist to have a retrospective of his portraits at the National Portrait Gallery.

Painted portraiture is but one of Tom Phillips’ formats. Fifteen years later, at the same gallery, he curated an exhibition of his large collection of postcard photographic portraits from the early part of the last century, under the title ‘We Are The People’.

Tom is an artist who works in an extraordinarily broad range of formats. These include opera (fulfilling roles as wide as composer, librettist and set designer), concrete poetry, ornamental forms of writing, sculpture, and site-specific designs (mosaic, tapestry, wire-frame objects). He has also taken on several roles – critic, curator, committee chairman for the Royal Academy, translator – all of which he has folded back into his art. 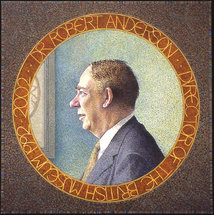 “When painting portraits, it’s about the subject’s presence.  Because of that, I get to know all of my sitters well, and often I know them in advance.

For instance, when Salman Rushdie asked me to do one of him as in the long intifada lockdown, we used to play ping pong together; and when I completed the portrait of Prof. Peter Goddard at St John’s College Cambridge; we spent the sittings talking about matters I hardly understood, mainly string theory. Dirac was his hero, and the famous Dirac equation dominates the back of the composition.  I got to know him very well. 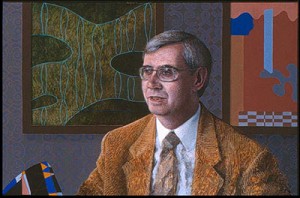 My picture of Samuel Beckett is also a particularly memorable one. To paint him I went to do drawings whilst he was directing Waiting For Godot. I felt a little awkward constantly disturbing him. It was difficult for him to do his work whilst I was doing mine. There was one session where I sat behind him and thought it might be quite good to do his portrait from behind, it would be just as, if not more, distinguishable and Beckett’s majestic ears are seen to good advantage.  They are, after all, the most sensitive ears for language alive. He liked the idea; he thought it was funny but also serious in a way. 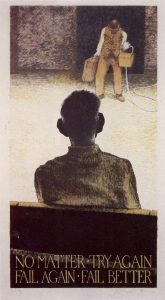 I did retire from painting portraits for a while because I stopped enjoying them, though, I did recently paint a portrait of someone. It was hard work; perhaps because I was out of practice, or perhaps because my standards have become higher over the years!”

Did your portrait make it?
23rd October 2018
Instagram Feed

We spoke to RP member Daphne Todd to find out more

Make sure to check out @nowwearesix.art which invo

This week's #famousportrait is 'Portrait of a Girl

Sam Dalby RP wrote this about his portrait of Justin Eckersley: 'I met Justin when he was working at the local building suppliers; he mixed my paint when I was painting and decorating for a living. He was chatty and funny, as well as being the most helpful member of staff in the place. He was a fount of all technical knowledge, and was happy to be honest about the products, even if it cost them a sale. He was well connected to the entire community. It didn't take long for us to become firm friends. After getting to know him better, I discovered he was, among other things: a former locksmith and safe cracker; a motorbiker (who had written off no less than four of his bikes); a mountain biker; and a fell runner. We had the love of fell running in common, and he joined the small group that I was racing with.The portrait came about when I was teaching a student. The time came for the lessons to progress to painting a real sitter, and it seemed like a good idea for Justin to sit for us. All I had to pay him with was tea & biscuits, and a steady diet of classic rock music. I started out with a preliminary sketch of his face, but my student was a slow worker, so while I waited for her to finish her drawing, mine expanded to take in the torso, the arms, and then the legs. The final sketch was a large Heath Robinson affair, drawn onto sheets of paper that could be disassembled, moved around and re-attached when the proportion and perspective was how I wanted it. Justin is possessed of a keen mechanical mind, so he was interested in the construction methods I was employing, and wanted to understand as much about them as possible. He was also a fan of the fireplace, and admired how the panels had been cast separately, the front of the borders milled flat so that they could be inserted from the rear of the surround.So whatever this portrait means to anybody else, for me this portrait is the record of our friendship, and a reminder of the mercurial shift of time. It's also the nearest I got to smuggling the lovely cast iron fire surround out of that flat.' ... See MoreSee Less