Dab Hands at the RP 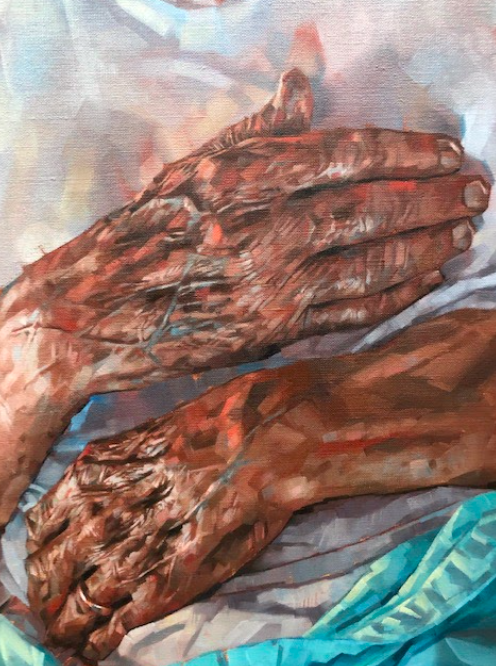 In almost every portrait at this year’s annual exhibition there was a pair of interesting hands. Manicured, rugged, wizened or spritely, hands often reveal a lot about their owner. Whilst focusing in on hands is not a particularly new practice for art enthusiasts, it’s always worth revisiting this topic and analysing all that hands have to offer.

Hands are one of art’s oldest subjects. Around 35,000 years ago in the Palaeolithic era, cave people made negative prints of their hands on walls, using manganese or red ochre pigment. In the Medieval period, hands were frequently portrayed in a flat, elongated style. Their rendering slowly changed to become more anatomical and detailed thanks to the influence of Leonardo Di Vinci and other Renaissance artists. Due to the rapid developments and varying artistic movements in the nineteenth and twentieth centuries, there are now endless ways to portray a beautiful pair of hands. This was certainly evidenced in this year’s exhibition…

As Henry Moore noted, hands can ‘beg or refuse, take or give, be open or clenched, show content or anxiety. They can be young or old, beautiful or deformed’ and this couldn’t be more true of the 2020 selection. 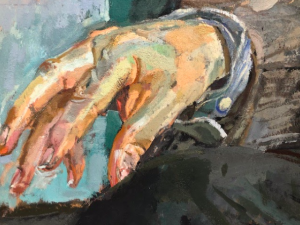 Professor Michael Scott’s hands convey a mischievous sense of fun. Although Scott is Senior Dean at Blackfriars, University of Oxford, this painting rejects stuffy institutionalism, opting instead to prioritise a sense of merriment and whimsy. It is Scott’s personality that takes centre stage and this is conveyed not least by his hands. The artist, Daphne Todd, renders them animated, imbued with a sense of musicality. The white and pink flesh tones escape the confines of the hands, leaving a trace of where his fingers once were. Scott’s illustrious career shows that he does not sit still for long. He teaches Early Modern English Literature, is a specialist in Theatre Studies, and holds positions at numerous universities across the globe. Todd’s work is unusual in the sense that it is a portrait of one man but contains two sets of hands. Todd clearly felt that Professor Michael Scott and his alter ego were both deserving of canvas space. Rendered in more opaque strokes in the foreground is the serious, inquisitive-looking Scott. Appearing apparition-like behind him, is the jovial, playful Scott, arms raised and fingers waving. Todd’s treatment of hands imbues the portrait with a sense of movement and excitement. Perhaps one could read the two “Scotts” as an allusion to his preoccupation with theatre and acting; the image contains a performance of solemn gravitas and a cathartic display of blithesome relief after Todd, presumably, granted him permission to be silly. We don’t have to reconcile these two “Scotts”. They are equally important and both offer insight into the infectious personality of the Professor. Ultimately, this is an unconventional portrait perfectly suited to an unconventional sitter. 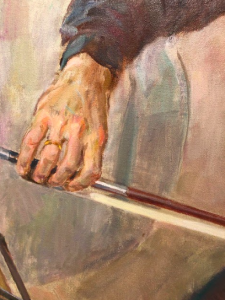 For prestigious and award-winning cellist Guy Johnston, hands are everything. This becomes evident in his portrait by June Mendoza. Her brushstrokes enliven the dexterous, strong and deft nature of his hands. June, having been both a daughter and mother to musicians, takes a special interest in painting them. As a former ballerina, she has a special appreciation for the music. She often requires her musical sitters to play for her as she paints to get a feel for their character. Guy Johnston’s portrait is no different as she expertly captures his light touch and relaxed hand position. She perfectly distills the vibrato in the piece he plays, yielding an unbreakable connection between bow and fingers, insinuating a mastery like no other. June pronounces the veins and thinness of Guy’s fingers to create a sinewy vulnerability to his hands which lends itself to Guy’s requisite intensity and dedication to his music. She creates a captivating performance upon the canvas. June’s use of colour also imbues life and musicality into the work; she offsets an underlying greenish skin tone with contrasting shades of red. This forms a more anatomical outline of his hands; his knuckles and carpal bones protrude out of the canvas against the neutral background. This stripped back and stark effect allows June to encapsulate the hard work that secretly prefaces Johnston’s effortless performance, creating a timeless love letter to music and his profession. 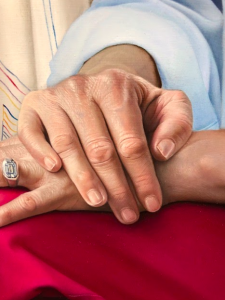 Mafalda von Hessen, a fashion designer by choice, but an heiress to aristocracy by birth, exemplifies a unique shade of the modern woman. It is appropriate that her hands lie centre to this beautiful photorealist piece by Massimiliano Pironti as it is her hands which facilitate this unusually balanced lifestyle. They provide her with the means to cut, sew and sketch her designs, but they also instil the image with a sense of dignified command and an air of formality – a royal touch. Here, Pironti meets an interesting challenge: painting into a pair of hands both grit and determination but also a sense of grandeur and elegance. Without doubt, Mafalda’s perfectly manicured nails and glittering ring lend themselves to the latter, but perhaps what is more transfixing is Pironti’s use of light. The silvery-blue wash of light that reflects off her fingers forges a poised and beautiful sense of togetherness. This effortlessly distracts from the faint wrinkles and in a way that avoids a feeling of avoidance, but simply presents her character in its most idealised form, offering a powerful homage to Mafalda’s modern and impressive interpretation of womanhood. 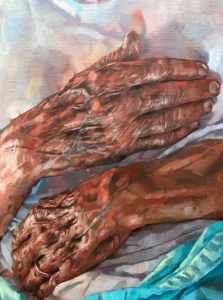 Simon Davis, ‘My Dad The Day Before He Died’

Simon Davis’ portrait ‘My Dad, The Day Before He Died’ is a portrait of illness, but also stillness and peace. The perspective is unusual; it is as if we are leaning over Davis’ father, watching him from above. The artist employs a concentrated palette of blues, reds and whites to depict his dying dad. These colours are also repeated in the hands. The thin, sinewy brushstrokes in blue and white convey the effects of age and failing health, highlighting protruding veins and deep wrinkles. The finely rendered hands contrast with the rest of the painting which is created using larger, flatter strokes. Our eye is therefore drawn to the unconscious hands that sit serenely on the backdrop of a clean white t-shirt. They are arresting and challenging, betraying the extent of his father’s illness and deftly echoing the dying contortion of his face. This painting directly confronts loss, and specifically losing a parent. Despite the limited colour palette and frank perspective, the portrait resists being a clinical depiction. There is, instead, a striking intimacy: a sense of great, undying love that we are privileged to witness. By suspending his father in a temporal space – ‘the day before he died’ – Davis has interrupted the ephemerality of dying moments and preserved his father at his most vulnerable and most precious.