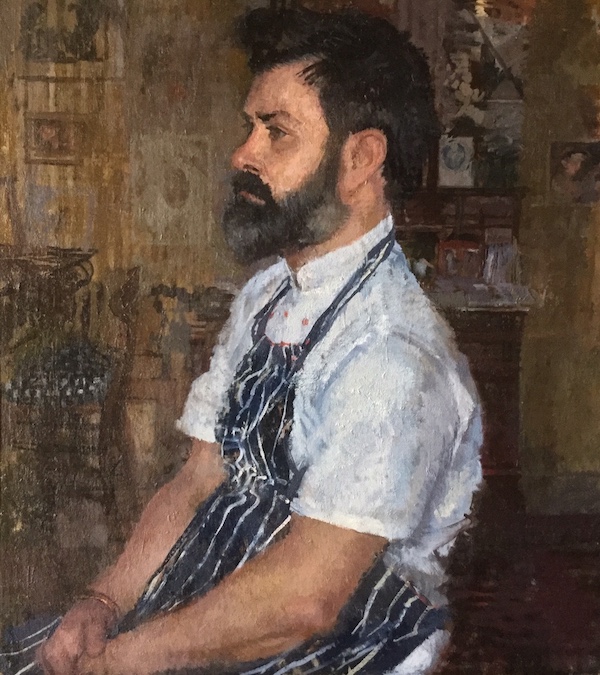 The Ondaatje Prize for Portraiture is sponsored by Sir Christopher Ondaatje CBE OC and the Ondaatje Foundation, this generous prize of a £10,000 cheque plus the Society’s Gold Medal is awarded for the most distinguished portrait of the year.

Kuhfeld was born in Cheltenham in 1952, and is the only child of a German prisoner of war and an English classical pianist. The painter studied art at Leicester Polytechnic followed by a brief period teaching at Rugby School of Art, before studying at the Royal Academy Schools under Peter Greenham RA.

In 2012, Kuhfeld was commissioned by HRH The Prince of Wales to paint the royal wedding of Prince William, Duke of Cambridge and Catherine, Duchess of Cambridge. Prince Charles has been a patron of his and Kuhfeld painted portraits of Prince William and Prince Harry in 1986. 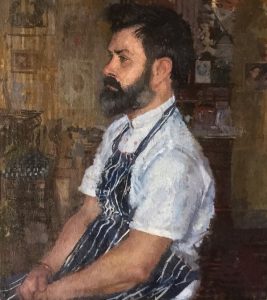 Waterhouse was born in Newcastle in 1989, he is a hyperrealist artist living and working in London. Despite the contemporary feel of his work, the artist draws much of his inspiration from artists of the Northern Renaissance. He paints with oil on wood panel in a highly meticulous fashion to create portraits with a heightened sense of realism.

Though the face remains the focus of his work, Waterhouse gives equal consideration to the environment of his sitter. The artist often amplifies the narrative of a subject’s life through still life elements in the composition, as seen here in this award-winning portrait of Jack Stanger, a retired aeronautical engineer. Commissioned by the Stanger family, the painting depicts its subject tinkering with a grasshopper escapement clock he made from scratch, surrounded by the paraphernalia of an engineer’s workshop. The unusual silhouette in the background is a nod to the engineer’s involvement in Concorde during his career. 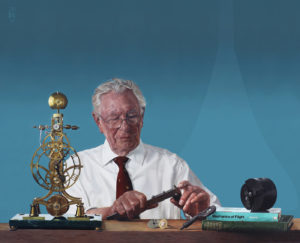 The £2,000 RP Award is made to the artist whose work best represents the year’s chosen theme – which was Skin

Hague was born in Nottingham in 1970 and studied Fine Art at The University of Northumbria at Newcastle. He now lives between East London and Copenhagen. Hague paints his subjects in a luminescent, bug-eyed style that is reminiscent of some of Lucian Freud’s early work. The artist generally works from life, producing a series of drawings or photographs over 3 to 6 sittings which he later works on from his studio. 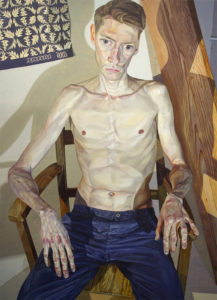 The Burke’s Peerage Foundation Award, established by its co-founders Mark Ayre and William Bortrick in 2015, is presented for Classically Inspired Portraiture in the RP Annual Exhibition. It is presented each year with a certificate and a cheque for £2,000.

Born in 1984, Chelsea-based painter Phoebe Dickinson trained at London Fine Art Studios and was among the 48 selected to exhibit at the National Portrait Gallery for last year’s BP Portrait Award.

Dickinson’s lush painting depicts Rose Hanbury, the Marchioness of Cholmondeley wearing her antique Turkish kaftan in the opulent surroundings of Houghton Hall’s tapestry room. “I wanted to create a large predominantly dark portrait that showed off the scale and grandeur of the room but also the luminosity of her English rose skin,” Dickinson explains. 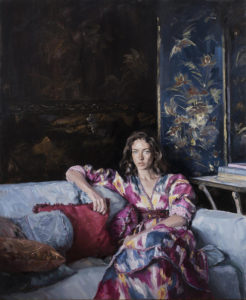 Robbie Wraith RP, Winner of The Prince of Wales’s Award for Portrait Drawing – £2,000

Donated by the Prince of Wales, this Award supports the importance of good grounding in the skills of drawing from life. This Award is for £2,000 and a framed certificate for a portrait in any recognised drawn medium.

Wraith left school at 16 to study painting in Florence at the invitation of Pietro Annigoni, an Italian portrait and fresco painter, best known for his portraits of Queen Elizabeth II. Over the course of his career, he has had over thirty exhibitions across Britain, Europe, America and China. Wraith has painted a long list of distinguished portrait sitters, including everyone from HM The Queen to Nelson Mandela. He has work in the private collection of HM The Queen, HRH The Prince of Wales, the Royal Collection Windsor, The Vatican, Oxford and Cambridge Universities and many more. 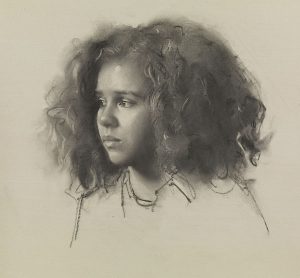 This award of £1,000 is for the most deserving artist in the exhibition

Chinese artist Yun Meng is fascinated by the relationship between the skin, colour and the space of the sitter in a specific environment at that time – as demonstrated here in this multi-textured work. Through painting, the artist expresses the complex emotions and spiritual world of the characters.

Judith Kellerman, Trustee of the Contemporary Arts Trust said, “Yun Meng’s painting revealed a lovely portrait of the subject which captured light, feeling and natural expression. Moreover, the skin tone and the figures were beautifully painted. The award, in memory of my daughter Alice Batkin, is given to convey how art appreciation and painting (and other mediums) can encourage expression and creativity in everyone.” 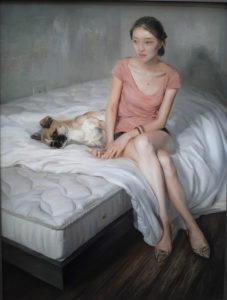 Direct engagement with his sitters is a key component to Caldwell‘s work. “A portrait is not only about achieving a likeness but also about capturing the sitter’s individual energetic presence,” says the artist.

Through his paintings, he aims to translate his “experience of looking.” Caldwell explains, “I want my paintings to suggest the sensation of stereoscopic vision, as the camera lens cannot, and to amalgamate the layers of looking – indeed the layers of time – into one image. Ultimately I would like my work to express the sensation of having been there, of having stood in my shoes.” 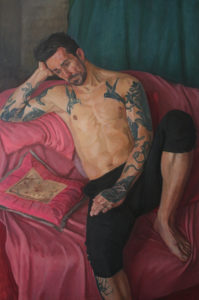