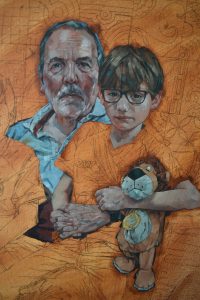 It was the death of a parent that gave birth to this work of art. It drew the Almeida-Hall family’s attention to the importance of family, and to their own mortality. 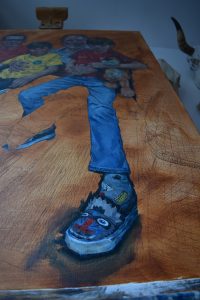 Simon Davis Almeida Hall detail of workings round a shoe

There was a second layer to this commission.  Being a same-sex couple, David and Fabiano’s boys are adopted ‘….best thing we ever did’ and so they also thought a family portrait would help to embed their family memories now and in the future. Something that would give them a sense of permanency.

The idea was to have a large picture showing the family relaxed possibly on the sofa, with the boys in their beloved football kit.

Having decided to spend their inheritance on a portrait they looked at all the artists on the RP’s website.  It was easier to identify an artist than they thought.  ‘Funnily enough there were only two whose easy style seemed to match with our own….. and we thought the price was ok too.’

In the end, they were drawn to Simon Davis who thought it was a nice idea to create a painting that was both a traditional family portrait and a celebration of a modern LGBT family and came to visit them. Simon spent the day observing and getting to know the family as well as taking his own photographs. Finding the right spot was a collaboration between artist and subject ‘We can’t see much point in having an artist and not listening to them.’ Simon really enjoyed his time with this family ‘My stay up there with them was really fun and getting to know them all and hearing their stories is one of the privileges of being a portrait painter.’

Simon went back to his studio to create the piece using email to communicate his progress. 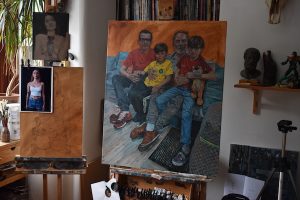 Work in progress at Simon’s studio

He composed the portrait to have an entwined feel to it. Every family member

is connected so as to affirm closeness and security. The composition is intentionally busy and a little chaotic, to reflect the day to day chaos of a loving family life.

The result has the relaxed, intimate feeling of a family snap and the painterly permanence of a family heirloom. 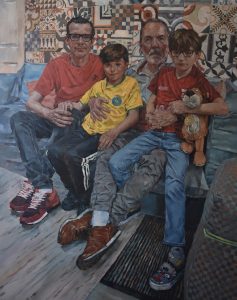 Join us as Jessica has her portrait painted
28th August 2020