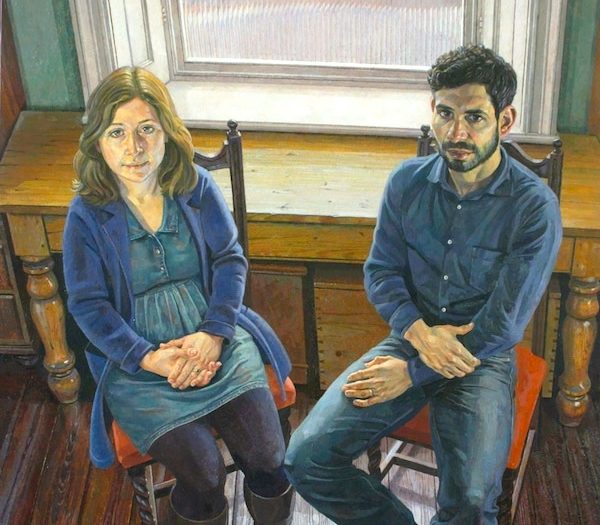 “We wanted to give something with some permanence to celebrate the marriage and also something that they wouldn’t get for themselves,” explains Robin who commissioned this portrait for his son and daughter-in-law-to-be as a wedding present. 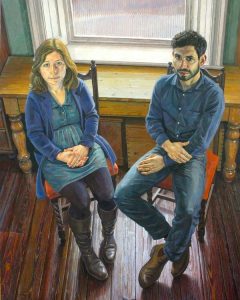 Having never commissioned a portrait before, he initially felt daunted by the wide range of possibilities but found the portrait commissions service provided by the portrait consultant very helpful.  They visited our Central London offices for a consultation where they viewed the artists’ portfolios.  This gave them a sense of each artist’s body of work. Using the special portfolio-boards, it was easy to get a feel for the styles that appealed to them. It also helped them to avoid being drawn by the nature of the sitter rather than the artist.  Once they had established the artists they liked, they went on to explore the practicalities such as pricing, method of working, logistics and availability. This made choosing the artist easy and enjoyable. 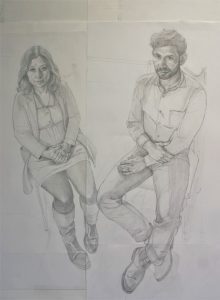 During the consultations Sam Dalby became an obvious choice, both sitters and donor were repeatedly drawn back to his style and body of work.

Alex and Liz visited Sam’s studio for the sittings where they discussed the finer details of the portrait.  Sam listened and made preparatory sketches as a first stage.

“We wanted the final portrait to be a dynamic but unfussy depiction of two equal and autonomous partners,” recalls the painter. “We tried many poses at the first sitting at my studio, but what we eventually settled on were natural, unforced poses, with the overlapping knees as a point of contact between the two on the picture plane.”

The artist shared how light functions as a unifying element of the painting and how the table has both compositional and symbolic significance: “I used the light to bind the two figures, it spills down between them, and cascades onto the floor. Bouncing the light off the floor silhouetted the legs and feet, and brought light and dynamism to the lower half of the portrait. The wooden table in the background, that seems to embrace the figures, was the centre of my own family’s domestic life for many years. The wooden chest under the table has dovetail joints running down either edge, the well-crafted joint has lasted many years, and will last many to come, as will their marriage.”

Robin found the evolution of the painting, from initial ideas through to the final portrait, fascinating commenting “It has a richness of associations that I hadn’t anticipated.”  In fact, they all found the whole process interesting and enjoyable and were very pleased with the way it turned out.