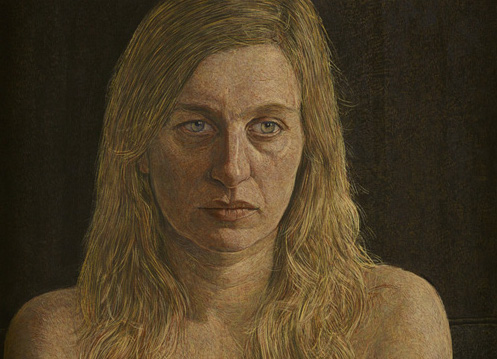 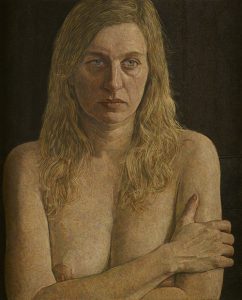 Antony’s shortlisted portrait  is titled ‘Emma’.  This portrait is painted in egg tempera, an unusual and painstaking medium using egg yolk to bind pigment. It is a translucent paint and is built up with many layers.  Antony constructs his paintings over a drawing which defines the architecture of his subject, the marks often looking like scaffolding. Each centimetre of Antony’s work is alive with a myriad of brush marks.

Antony’s sitter, Emma Bruce has modelled for him before and, through this, has become a friend of his. “I met Emma Bruce in 2006 at a life drawing class where we were both working from the model and asked her if she would sit for me . The coincidence was that she had previously sat for Robbie Wraith when she was living in Oxford. Since  2006 she has sat for eleven egg tempera paintings including the one shortlisted for the BP this year, and countless pencil and charcoal drawings. Most of them have been portraits, but  one was a large commissioned nude in an  interior in Eton Place , and also a couple of paintings in recent years which have depicted her outside in a landscape setting. Two paintings of her have been previously exhibited in the BP Awards in 2014 and 2015. Emma is also an artist in her own right , and has been developing her work during the time she has sat for me , and is my invited artist for  the Mall Galleries exhibition this year.” 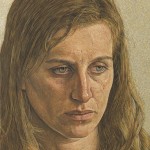 Ben’s shortlisted work ‘Breech!’ is a portrait of his own family. Ben was seen with a baby at last year’s BP Portrait Award Ceremony where he was collecting his £8,000 third prize for his portrait of the poet Hugo Williams.  Ben has been selected for this exhibition twelve times over the years. ‘Breech!’ is painted with tender observation. In the background, the paraphernalia of domestic life is depicted with the quality of a still life. The high observation point, vertical format and diagonal drive to the composition are all typical of Sullivan’s work.

Breech! depicts the artist’s wife Virginia breastfeeding their 8 month old daughter Edith, at a time when Sullivan says ‘a sense of calm descended after the usual period disarrangement that new parents face.’ The artist wanted to celebrate the love that had come into their lives and reflect on the worrisome time the couple faced during Edith’s birth. The painting was made over four – five weeks in the artist’s studio when Edie’s cooperation was forthcoming.

The judges of the BP Portrait Award said that his portrait of Hugo that this work is ‘Finely rendered on a small scale, we thought the portrait gave us a strong sense of the presence of the sitter. The painting’s ageless quality is subtly balanced by the appearance of the modern wrist-watch.’ 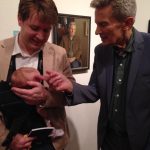 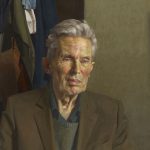 Thomas is the third artist for his ‘Double Portrait’

This award is selected from 2,580 entries by artists from 87 countries around the world

The BP Portrait Award 2017 exhibition will run at the National Portrait Gallery from 22 June to 24 September 2017.

More about the BP Portrait Award

And our final award for this year, The Smallwood A

And this year's RP Award goes to *drum roll* @Step

Our awards continue! This year's The de Laszlo Fou

Our awards continue! This year's RP Prize for the

@emmawesleyportraitpainter tells us about her port

@suzonlagarde tells us about her portrait ‘Matth

We spoke to President of the Royal Society of Oil

@alex_tzavaras tells us about his portrait ‘Pete

In a series about this year’s conversation piece

Error: Server configuration issue
We use cookies to ensure that we give you the best experience on our website. If you continue to use this site we will assume that you are happy with it. For more information please see our Privacy Policy.OkPrivacy policy