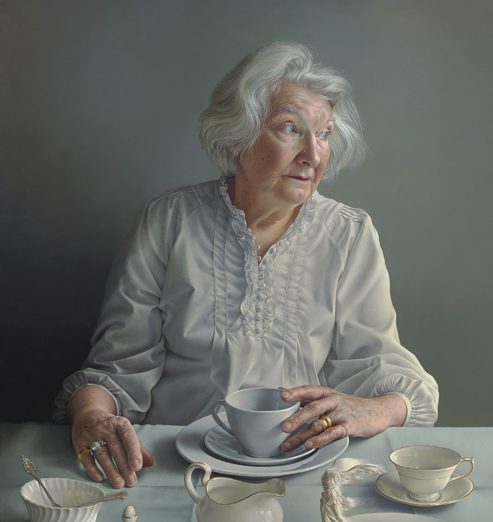 Associates of the RP have numbered among the winners of the BP Portrait Award on many occasions, including last year’s winner Benjamin Sullivan RP NEAC, the 2010 winner

Daphne Todd OBE PPRP NEAC, and the 1996 winner James Hague RP. This year, we are delighted to announce that the overall winner of the BP Portrait Award is regular RP exhibitor, Miriam Escofet.

Miriam’s portrait of her mother ‘An Angel at my Table’ wowed the judges with its surreal and sensitive representation of the universal mother figure. In Miriam’s characteristically luminescent style, the artist presents a table laid with fine china at which her mother sits taking tea, looking to her left at something unseen. Not only has the artist been praised for the great skill demonstrated by this work, Miriam has also received touching feedback from viewers for whom ‘An Angel at my Table’ has helped them reconnect with their own mother, often after the mother has passed away.

There is something in the fineness and frailty of the china, itself made of bone, that evokes both the necessary ephemeral and the human desire to preserve the things we love. Miriam has captured a moment of connection and nostalgia with her own mother, yet the sitter’s gaze has moved on, hinting that this connection might one day break. It is an incredibly powerful painting, depicting the sense of dependence, admiration and fear of loss that is felt by all children.

We are furthermore delighted to share that former RP exhibitor, Suffolk-born 28-year-old Ania Hobson has won the BP Portrait Young Artist Award 2018 for her work, ‘A Portrait of Two Female Painters’. The double portrait presents the artist alongside her sister-in-law, Stevie Dix, with whom Ania shares a studio. Although Stevie is an abstract artist and Ania a portrait painter, the two women take a great deal of inspiration from each other.

The perspective of the work is angled upwards at the women – a classic shot used in filmmaking to indicate a character’s powerfulness. In this way, and through their dynamic un-gendered poses, ‘A Portrait of Two Female Artists’ makes a feminist statement about the historic under-representation of women artists, and Ania and her peers’ commitment to remedying this imbalance.

Both winning works are powerful statements as well as stunning works of art, achieving a level of accomplishment and complexity that the RP has come to expect through its intimate dealings with the artists, Miriam Escofet and Ania Hobson. We heartily congratulate them both.

‘An Angel at my Table’ and ‘A Portrait of Two Female Artists’ will be on display at the National Portrait Gallery from 14 June to 23rd September before commencing a tour of the UK.

For information on how to commission these artists, contact enquiries@therp.co.uk.