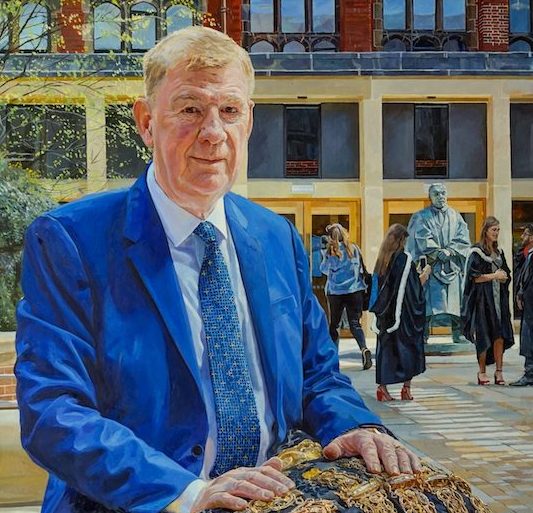 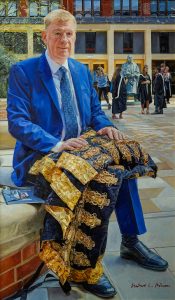 The initial shortlist for this portrait was drawn up using the Royal Society of Portrait Painters Catalogue.  Our Commissions Consultant then helped to build a picture of each of the artists with additional images and information on their method or working, pricing and availability to facilityat the final choice.

Alastair Adams, who grew up near Sedgefield, was chosen to paint this portrait.  The first sitting was spent chatting with Sir Liam about his career and scouting possible locations for a setting.

The setting chosen was high risk, in this country, and perhaps particularly Tyneside, good weather can be a gamble. Alastair embraced the risk, enjoying the challenge of diverse settings for his portraits and for this one in particular commenting “What better setting for a portrait and way to visually celebrate Sir Brian, his role, the university and its students, than on a bright spring morning at just the right time of day when King Quad fills with light. Location justified!”

In the final composition Sir Liam is posed in the reflected light of the Quad with gown off to recognise the end of his tenure. Although known for his height he is posed seated so as not to overarch but remain approachable and accessible. The colour of his suit was chosen to be distinctive but not to dominate the composition. Students play a major part in the setting, celebrating their academic achievement round a statue of Martin Luther King. As Alstair commented “It is a tribute to the University that in 1967 it chose to offer an honorary degree to Dr Martin Luther King Jr. ahead of other institutions by many years, it undeniably aligned itself with his dreams to educate minds that think intensively and critically within a collective society”.

Do you ever walk around an exhibition and wonder w

We are very pleased to announce the theme for one

Benjamin Hope was also elected to membership at th

Kathryn Kynoch was elected to membership at the 20

@markdraiseyportraits tells us about his piece 'Th

@bayscaroline tells us about her self portrait 'Re

@naimaaouni tells us about 'Wabi-sabi': 'The model

Following on from yesterday's post we delve even further into Ellie Lachs @ellielachs_ interesting article. Today we look at what Warren Grant, our Head Technician, says about 'Receiving Day':An exhibition that is showing more than one artist’s work such as an open show will have an assigned ‘Receiving Day’; it is essential that artists diarise delivery and collection dates to ensure that this runs according to schedule. On this day, all the exhibiting artists who are available to visit the gallery in person—we will get to those who cannot visit in person shortly—will drop their work off. Warren noted that there can be up to 200 pieces delivered in one day and the technician team is responsible for organising all of these works.Read the full article at therp.co.uk/behind-the-exhibition-an-interview-with-warren-grant/ and follow for more tips on exhibition to do's. Following our announcement about one of next years theme's at our Annual Exhibition as 'Self', this is a particularly good moment to get thinking about what preparation goes into a submission beyond painting. Artists... take note! ... See MoreSee Less