An interview with the artist, Tom Croft

The crossover of portraiture and the NHS has offered a moment of light within this difficult year, and this is largely down to Tom Croft, a portrait painter from Oxfordshire, who exhibited in this year’s annual exhibition. 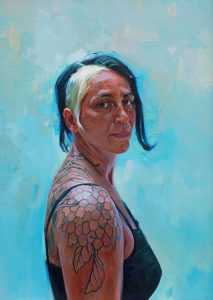 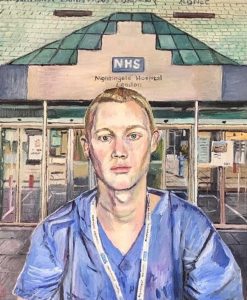 Croft pioneered the Portraits for NHS Heroes initiative whereby he offered to paint a free portrait to the first NHS Key Worker to contact him. He suggested that other portrait artists offer one too. Artists were asked to post their portraits under the hashtag #portraitsfornhsheroes so everyone could be seen online in a virtual exhibition. We caught up with Tom to talk about how the project came about and what it has taught him about portraiture:

“I am dyslexic and terrifyingly disorganised so the idea that I would even attempt a project like this, where thousands of artists and NHS staff were messaging me about getting involved – all of which I had to reply to – whilst getting the message across clearly and effectively of how the project works, is frankly ludicrous, but when you feel strongly about something you don’t worry about that. Clapping on our doorsteps was nice but I wanted to offer something more personal.

Overall the project has been hugely moving. I think one of the unexpected things I’ve learnt is about the nature of social media as a force for doing something positive. Social media is often perceived as being quite a vile and toxic environment and I think on certain platforms it is, but I posted this initial offer on Instagram and got an immediate and overwhelmingly positive response back. I wasn’t surprised by how empathetic the art community or more specifically the portrait artist community is; people were desperate to help and be involved and that was a lovely thing to see; all these artists were thinking in the same way, and offering their time and skills for free. The initiative felt very direct; each portrait would at least make one person’s day a little better, hopefully.

That you can put something out there on your phone and it can have a global audience really proves that it’s worth dreaming big. Ultimately the project was all about thanking and connecting people; it has connected thousands of artists with NHS workers and given us an insight into their challenging and terrifying world for the last year or so. It’s really given me a renewed sense of appreciation for what the NHS do for us.

Through this project I’ve also definitely rediscovered the value of portraiture and by that I mean specifically the documenting or recording of somebody. I’ve painted two posthumous portraits recently and the process is obviously very emotional on both sides. 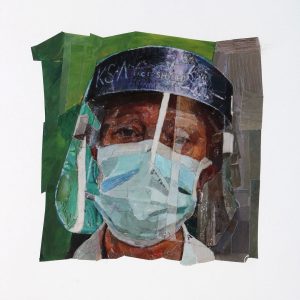 There is something about the physicality of a portrait, you walk into a room and you see it on the wall and you see the light reflecting off it and it’s like somebody is actually there. You can bring them to life in that respect and it’s a huge thing to see how effective and affecting that is; you have preserved a bit of them in the physical world.

I am always open to any kind of initiative where something can make a positive impact. In challenging times we can all feel moved to want to do something, it’s just a matter of finding what you can do. My hope is that we are not done with this project yet –  a physical exhibition would be incredible. I’d even like to see an annual NHS portrait exhibition as a permanent fixture on the art calendar. There’s so much potential for it to form a really interesting basis for a portrait exhibition and how the NHS touches people in different ways. Having established that people are willing to take part in something like this, it would be great to get it on the map as an annual celebration and thank you to the NHS workers through portraiture.”

Interviewed and written by Ellie Lachs

“The support and goodwill of the RP members has already been amazing”: Martin Brooks is Elected a Member of the RP
4th November 2020
Instagram Feed