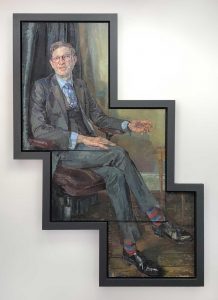 Daphne’s often unusual yet exceptional compositions make her opinions of framing interesting and alternative. In particular, we wanted to know about her portrait of Dr Gary Savage which was featured in our Annual Exhibition this year. Daphne told us of the piece and her experience working with large, irregular canvases:

“Some institutions don’t want something unusually shaped because it tends to break the regularity of the hang if canvases start jumping out. But if I am allowed to, which I usually am, I like to let the painting draw me along. I found the curation of Dr Savage at this year’s Annual Exhibition–placed walking down the stairs—rather witty. The steps echoed the shape of the painting. I like that the Mall chose to do that, it makes painting irregular canvases all the better when they fit into a space. Or perhaps they simply had nowhere else to put it!

Because I only work from observation (I don’t work from photographs at all) my reaction is like any other human being when faced with somebody I don’t particularly know. I stare at their face to start with. When I was a student, I was told not to start drawing with the left eye (which is the natural place to start) but to think about general things such as the overall design and the space in the painting. You were working from the outside in like that and I didn’t want to do that, I wanted to start where I wanted to start–very often that is the left eye but sometimes an upper lip catches my eye. Importantly it is something that strikes me about being very particular about that person. It’s only when I have been staring at them and working from them for a day or two that I begin to need to put other parts of the body in.

With Dr Savage, who found it somewhat difficult to sit still and not keep talking and gesticulating, it became essential to put the hands in and get that middle part of the body. The panels that make up his portrait recede, not in terms of space, but in terms of the amount of time I spent on them. So, the framer framed them consecutively: the head first, slightly in front of the next panel.

When I paint a portrait, I bring masses of panels with me as I never know what I am going to need or how far the portrait might stretch. Because I mostly go to the sitter to paint, I bring lots of bulldog clips to attach the panels in place as I paint in situ. Painting using panels does become quite convenient: you can paint on one panel without the other bits. You need to put them together from time to time but largely I paint each panel individually. There can be a problem with painting from observation when you stand in front of a huge canvas and you have to move your head to see the subject. I prefer to sit as I have more control: my eye stays in one place. If my eye is fixed, I can’t reach the outer edges of the frame without getting up and moving my eye so instead, I bring each panel to my eye, allowing me to remain seated with one specific viewpoint.

When choosing how much of the background I want to include I find that you can only see things in front of you in terms of their context, that is why I like to go to the sitter and paint from observations. At the same time, I am an observational painter, not a narrative painter. For me, painting is entirely visual. Because everything is relative, you have to include some background (skin colours look different against different background colours, for example). Quite often a view from a window or an object on a table might be significant, that can be attributed to them and looks visually appropriate. If I can insert a moment of their life which they want to include I will, but it must make visual sense. Dr Savage had a little bit of the Berlin Wall in his office. I would have liked to have included some of that but due to Covid our first and last sittings were months apart and there wasn’t enough time. But at the same time, I don’t think it matters with a painting: that was what I perceived in the time I had.”

Lastly, we asked Daphne about her perception of frames:

“Because I often paint on complicated shapes, the frame profile is necessarily very simple. But it’s also more expensive the more corners you have, and my work often has a lot of corners.

My framer gets on with framing because he knows what he’s doing. The profile of the frame tends to be the same. The choices are relatively small. The frame is only meant to be protecting the edges. You are not supposed to be aware of the frame in any painting. You’re not supposed to go away thinking ‘that’s a fantastic frame’ you are supposed to think ‘what a fantastic painting. I dislike the trend of unframing that is somewhat popular now. The frame is a buffer between illusionary work and the real world. I find unframed paintings, the collision between painting and the real world, I find that junction jarring if there isn’t a sort of buffer.” 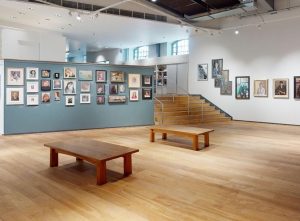 Interview and article by Mary Petherick