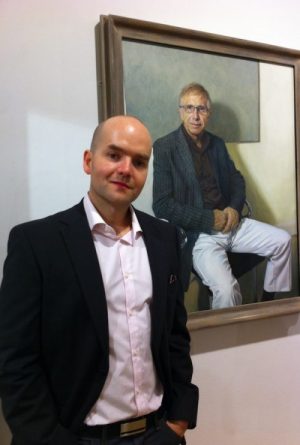 New Member; Mark Roscoe’s career is on a roll.

Mark Roscoe’s Self Portrait entry was used to advertise the 1998 BP Portrait Award, by 2012 he had started exhibiting with the Royal Society of Portrait Painters.  Mark was soon noticed and won the Changing Faces commission. The resulting commissioned portrait was exhibited the following year and landed him the prestigious Ondaatje Prize for Portraiture. The next year he was elected to Associate Membership and now he has been elected to full Membership.

Mark’s most recent portrait commission for the Faculty of Scottish Advocates has just been unveiled.

“Things are quite exciting for me at the moment, being elected as a member of the Royal Society of Portrait Painters was simply wonderful and made me feel welcome and appreciated by the artists I’ve always looked up to.
I have some interesting commissions in the pipeline and so many ideas to develop and as I always like to say, watch this space!”  says Mark.

Born in Australia but raised in the UK, Mark went on to study Fine Art at Duncan of Jordanstone College of Art where he achieved a BA (Hons) Degree. His Self Portrait entry was used to advertise the 1998 BP Portrait Award which helped to establish his reputation as a portrait painter. Since then Mark has completed over a hundred commissions for both private and corporate clients, painted Bill Oddie for the BBC 1 Programme “Star Portraits with Rolf Harris” .