The hanging of the lawyers!

Mark Roscoe’s portrait for the Faculty of Scottish Advocates. 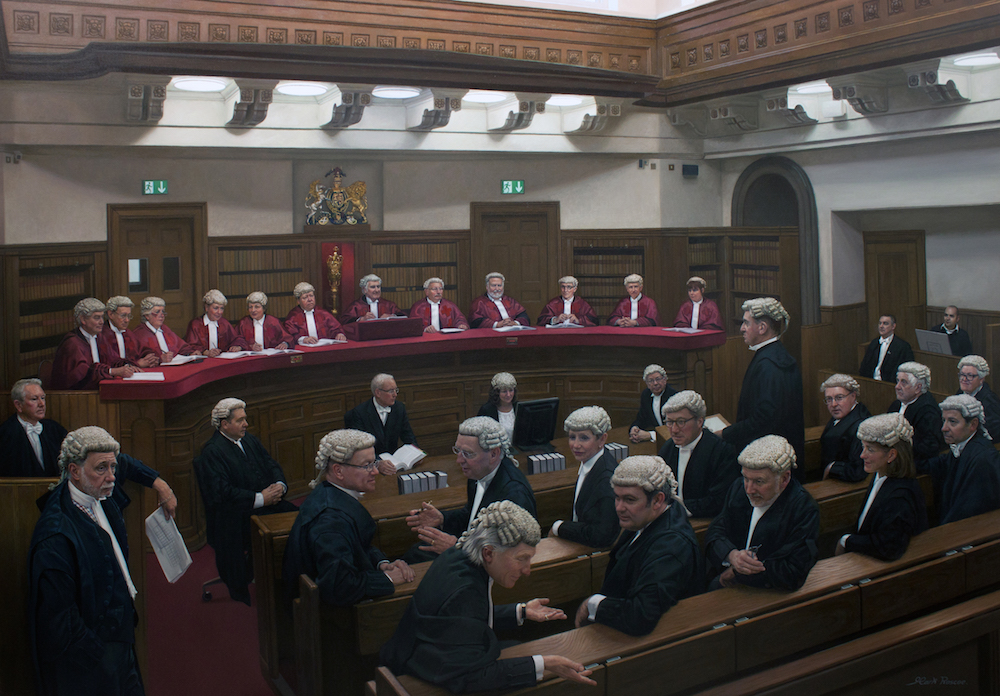 The Faculty of Advocates by Mark Roscoe RP

Mark worked on this portrait of 32 members of bench and bar over eighteen months. If you look, you can see he has discretely included a portrait of himself in this work.

Commissioned in 2013, it depicts the First Division courtroom in Parliament House, with a Bench of 12 senators, headed by Lord Gill, the Lord President, and Lord Carloway, Lord Justice Clerk. 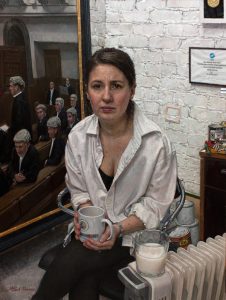 Clare In The Studio, by Mark Roscoe

The Faculty of Advocates was in the studio for a long time, so long that became  part of family life and he included a corner of the it in a portrait he painted of Clare, his wife. His toddler made several attempts to assist and added his own signature to the bottom of the painting ‘but don’t tell the Faculty of Advocates that! says Mark.

Mark enjoyed the challenge and is looking for another multi portrait commission to keep him on his toes.

Both paintings were shown at the Royal Society of Portrait Painters’ annual exhibition at the Mall Galleries in May.

Mark’s career is in the ascendent. In May the Membership of the Royal Society of Portrait Painters voted on Candidate’s work during the Society’s Annual General Meeting and elected Mark Roscoe as a full Member .

Do you ever walk around an exhibition and wonder w

We are very pleased to announce the theme for one

Benjamin Hope was also elected to membership at th

Kathryn Kynoch was elected to membership at the 20

@markdraiseyportraits tells us about his piece 'Th

@bayscaroline tells us about her self portrait 'Re

@naimaaouni tells us about 'Wabi-sabi': 'The model

Following on from yesterday's post we delve even further into Ellie Lachs @ellielachs_ interesting article. Today we look at what Warren Grant, our Head Technician, says about 'Receiving Day':An exhibition that is showing more than one artist’s work such as an open show will have an assigned ‘Receiving Day’; it is essential that artists diarise delivery and collection dates to ensure that this runs according to schedule. On this day, all the exhibiting artists who are available to visit the gallery in person—we will get to those who cannot visit in person shortly—will drop their work off. Warren noted that there can be up to 200 pieces delivered in one day and the technician team is responsible for organising all of these works.Read the full article at therp.co.uk/behind-the-exhibition-an-interview-with-warren-grant/ and follow for more tips on exhibition to do's. Following our announcement about one of next years theme's at our Annual Exhibition as 'Self', this is a particularly good moment to get thinking about what preparation goes into a submission beyond painting. Artists... take note! ... See MoreSee Less