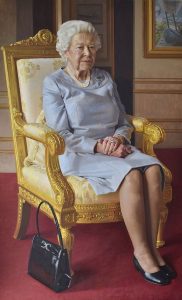 This commission for Benjamin Sullivan celebrates the RAF Club’s 100th Anniversary.  He has been working on it since February 2018.

The portrait includes a number of personal links between Benjamin and this commission. If you look in the background you will see a Spitfire – ‘S’ for ‘Strike’ – from 253 Squadron from which the artist’s grandfather, F/Lt JM Sullivan, flew over Albania during WW2.

The image on the right is a portion of ‘Hurricanes in Flight‘ (1944), by Eric Ravilous, painted as part of his work for the War Artists’ Advisory Committee. Ravillious was an artist who lived and worked in the area in which Benjamin now lives.

‘It was almost happenstance that it was placed there but it gives some idea there’s actually a person as well as a figurehead – it’s personal.’ He said.

The Queen has been Patron of the Club since 1952 opened its new wing as well as to unveil the painting.

More about Benjamin Sullivan who has just won the BP Portrait Award.

It’s All in the Details
6th October 2020
Instagram Feed

This portrait is part of @TimBensonart 2018 series

Look at this fantastic painting of Timpson by @ala

Today we are taking another look at this fatastic

Look at this fantastic piece by @nealeworley ! It

This week we are looking at portraits which celebr

This beautiful painting of 'Alisha' is part of @ti

As we continue to look at portraits of children th

As part of our series on portraits of children we

“My husband blew me away with this portrait, as

Portraits of children always offer an exciting and

This portrait is part of Tim Benson's 2018 series 'Visions of Zambia'. Tim travelled to Kitwe Hospital Eye Annexe in Northern Zambia to meet many of the children and adults who had this sight-saving surgery as well as the surgeons and other medical professionals who delivered it. This piece is of Raphael, a glaucoma patient. It's a fantastic and striking piece. ... See MoreSee Less