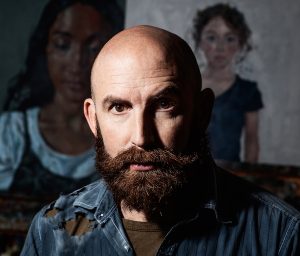 Portrait photographer Aliona Adrianova has taken portraits of members of the Royal Society of Portrait Painters. These form part of her series on contemporary artists in the setting of their own studios. Here, the photographer sets out not only to capture the true personae of the artists as creators, but also to explore their special affinity with art, beauty and the creative process. 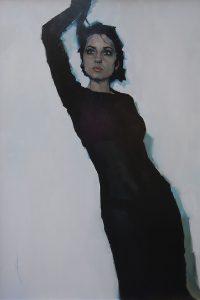 During her photographic session with the portrait painter Simon Davis, he revealed that he does not equate beauty with obvious physical aesthetics.  Aliona recalls that ‘To him, beauty is confidence, creativity and the desire to be different. Davis generally likes using a very limited palette of colours and wanted to strip the portrait back even further. He wanted to introduce an atmosphere that could almost be mystical…. and definitely with no smiles!’

Simon in return has created a portrait painting of Aliona “I really wanted this to be a portrait that was compositionally strong. Aliona was wearing a black dress that was so clean and uncomplicated that I wanted her to be a kind of fluid ribbon running the height of the portrait.”  You can see this painting as well as other works of Simon Davis in the forthcoming exhibition Face|Time that opens at Dellasposa gallery (http://www.dellasposa.com/facetime/) on the 3rd of November.

Simon Davis is not only a portrait painter, he worked as a Graphic designer/illustrator and currently illustrates strips for British Comic 2000ad. Much of this fully-painted work has been syndicated worldwide and collected by Hamlyn and Rebellion Books in the UK, Egmont in Germany and DC Comics in the US. He has also created storyboarded music videos and TV advertisements including Muse, Tori Amos and Barclaycard.