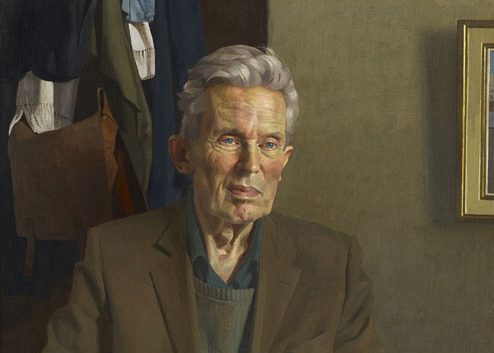 The judges of the BP Portrait Award said that this work is ‘Finely rendered on a small scale, we thought the portrait gave us a strong sense of the presence of the sitter. The painting’s ageless quality is subtly balanced by the appearance of the modern wrist-watch.’  This Portrait, of the poet Hugo Williams, won the third prize worth £8,000.

Ben met the poet at a private view and, being a fan of his poetry,  Ben invited Hugo to sit for him. The sitting took place in Hugo’s Islington Home. 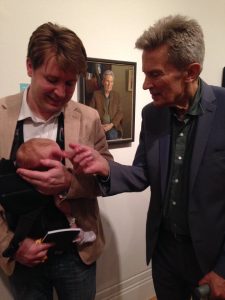 His work has been widely exhibited, including at the Royal Academy and National Portrait Gallery. Among other distinctions, he has received a Carrol Foundation Award, the Kinross Scholarship, and a grant from the Elizabeth Greenshields Foundation. In 2007 he won the Lynn Painter-Stainers Prize.

He was elected a member of the New English Art Club and the Royal Society of Portrait Painters in 2001 and 2003 respectively. He was the youngest person to be elected to those institutions. In 2009, he was made a Freeman of the Worshipful Company of Painter-Stainers.His work is to be found in numerous public and private collections, including the National Portrait Gallery, the Royal Scottish Academy, Parliament House, Edinburgh, and several Oxford and Cambridge Colleges.

In 2009 he became artist in residence at All Souls College, Oxford, where he undertook a large commission depicting College staff. The resulting work, The All Souls Triptych, was displayed at the Ashmolean Museum in 2012 and now sits in one of Hawksmoor’s twin towers at All Souls College.

Something for the weekend? Head down to Watts Gallery - Artists' Village for our exhibition "The Show Goes On: A Theatre of Portraits".

Start your visit at Watts Studios and learn about G F and Mary Watts's life in Compton. Step back in time in the G F Watts Studio, and discover how Mary Watts created the gesso panels for Watts Chapel...
View on Facebook
·Share