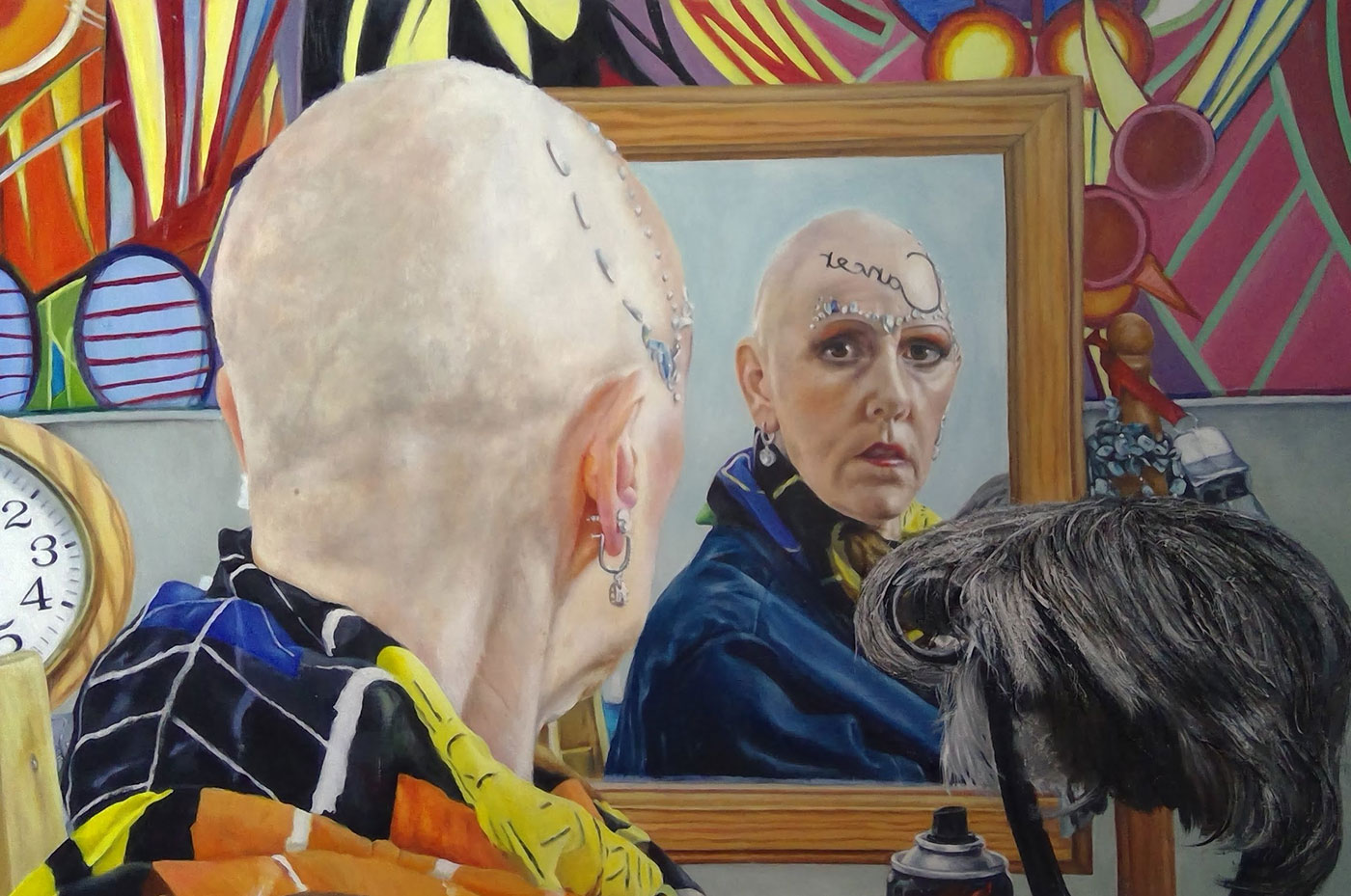 Suzanne Gibbs on her painting ‘Facing It’

ED: Hello, Suzanne. Thank you for agreeing to speak to me about your portrait ‘Facing It’. To begin, I am interested in the specific reason you chose to paint your sister in this way – is it to challenge preconceived ideas of female beauty? To depict her stark reality? To honour her? Maybe all of the above or something completely different!

SG: Thank you, Emmeline, for responding to my portrait, ‘Facing It’ and giving me the opportunity to share more about my thought process behind the painting.

Initially, my intention was to depict the stark reality of facing cancer from a woman’s point of view and of that as the sitter’s sister. As the judges this year were looking for ‘an interesting and engaging interpretation of the idea of movement within the parameters of portraiture’, I decided to explore and convey our emotional journey, moving forward. It was Sally’s initial courage and positivity, combined with her sense of humour, that compelled me to compose a scene rather than just a portrait. I wanted to illustrate that behind her baldness, lack of eyelashes and eyebrows, she was still a courageous woman of beauty and confidence.

ED: And why was it that you choose to paint the portrait in landscape?

SG: Since early childhood, I have been fortunate to study and admire the skilful landscape painting, ‘The Ambassadors’. This well-known painting at the National Gallery by the famous portrait painter Holbein the Younger, inspired me to use symbolism in my own work and to reflect on the subject of mortality. I wanted to attempt creating a scene of past, present and future and, by using objects like the clock without hands, represent the abstract concept of time and movement. Unlike the restrictions of the portrait format, the landscape orientation gave me the freedom to do this. I deliberately chose to paint landscape in the hope to convey the moving stages of the psychological and physical challenges as we moved forward.

ED: There is a lot of literature about the inextricable link between hair and identity. Do you feel like physically attaching Sally’s hair to the work reaffirms her identity or shows that she still has one when her hair is relegated to the side of the image?

SG: I imagine it is not until some of us lose our hair that we realise how important it is to us. Apparently both men and women fear hair loss most, as one of the side effects after being diagnosed with cancer. Sally, however, was not so fearful and, with her great sense of humour, made many jokes about her hair loss. Unlike myself, in her youth she had been very experimental with her image and was courageous with expressing her identity. For those who are old enough to picture it, she was a punk with a mohawk hair style. Sally seemed able to accept the baldness as her new, but temporary identity. The problem, however, is that baldness on a woman has become a symbol to the world that you have cancer. In Sally’s words, ‘I wear the wig because when the public see the baldness, they feel uncomfortable, because they only see cancer. Without the wig, I feel like I have the word cancer written on my forehead.’ As Sally had come to terms with losing her hair and not her identity, it was most likely the underlying anxiety and horror of losing my own crowning glory that compelled me to attach her hair to the painting. Unable to face my own fears of losing my hair, I wept as I combed each strand and applied it to the canvas, so it became deep rooted and reunited with her portrait.

ED: We don’t see Sally’s face directly but instead we are presented with her reflection – can you elaborate on this choice?

SG: With the judges looking for ‘an interesting interpretation of the idea of movement’, it wasn’t enough to just paint a portrait of my sister with cancer. Having interpreted movement as a change of state, emotion as well as action, I chose a composition with her facing a mirror to reflect a moving and emotive scene. I wanted the viewer to be faced with the back of her head, before being drawn into Sally’s colourful reflection in the mirror, staring into the eyes of the viewer. This potentially devastating disease has moved on to affect one in two of us and my intention was to use the symbolic baldness of cancer as a reminder of the stark reality that faces so many of us.

ED: I love the carnival-like gems on Sally’s face – was there a particular inspiration for these?

SG: I wanted to create a colourful, fun and vibrant portrait of my sister, despite the challenges and uncertainties she is facing. Sally has always loved painting her face and in her youth she was able to use colour creatively and expressively in her everyday life, exuding confidence in her appearance, happy to turn heads. Her identity was intrinsically linked to her pop culture, self-expression and creativity, so she was unperturbed by public opinion. Today, people are more conservative with their appearance and it is difficult to believe that there was a time youngsters wore a chain from their ear to their nose and decorated their faces with bright coloured make up of oranges, greens, bright reds and blues. Layers of colours, patterns and textures were worn where we now see fashion as labels and logos. Sally is not only remembering her past, but using that dormant creativity to express her new identity. In her portrait, where the cancer has taken away her eyebrows, her hair and her eyelashes, she simply adds them herself and further enhances her features with colourful gems. I placed her at the dressing table, new face on, like an actor in a play ready to face the world.

ED: Thank you so much for your time, Suzanne. I think it is a compelling, beautiful painting – a stunning testament to your courageous, glamorous sister.