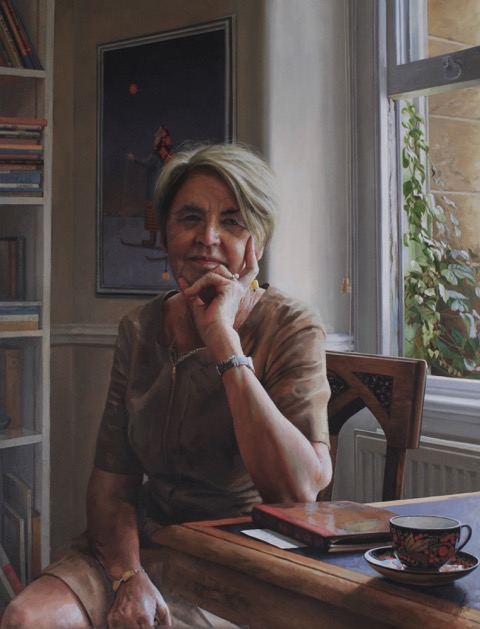 Jason Sullivan’s portrait of Professor Judith Pallot is the first portrait of a female fellow to hang in the Great Hall of Christ Church College, Oxford. It will hang alongside portraits of Henry VIII, Cardinal Wolsey, John Locke and William Gladstone. The portrait is currently hanging in Christ Church’s Picture Gallery but will be moved into Hall during the week beginning 14 August 2017.

At the unveiling, Professor Pallot spoke of what a special experience it was to sit for her portrait. She said that she hoped that this will be part of a process of wider diversification of the portraiture at Oxford. “I wanted a portrait that is modern and symbolic of the change that my election signalled for the college and that departed from the formal style of the earlier portraits of academics without it being so revolutionary that it jarred with my predecessors hanging alongside. ” 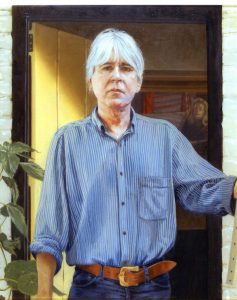 To create the portrait, Jason Sullivan spent some time walking around college with Professor Pallot in order to find the perfect backdrop for the portrait, before choosing to set it in her offices.  Jason included the painting of Baboushka to denote Professor Pallot’s research interests and time spent in Russia and he included some ivy on the wall to show her love of nature. The typically Christ Church chair that she is sitting on, and a teacup in the foreground, symbolise the excellent hospitality that Jason received whilst working at Christ Church!

Professor Pallot was appointed only 6 years after Balliol elected its first woman as a Fellow and Tutor. The first female students started at Christ Church in 1980, around the same time as the rest of the, previously all-male, colleges started admitting women. Since 2008 all of the colleges have become co-educational. The University website has more information on the history of women at Oxford.