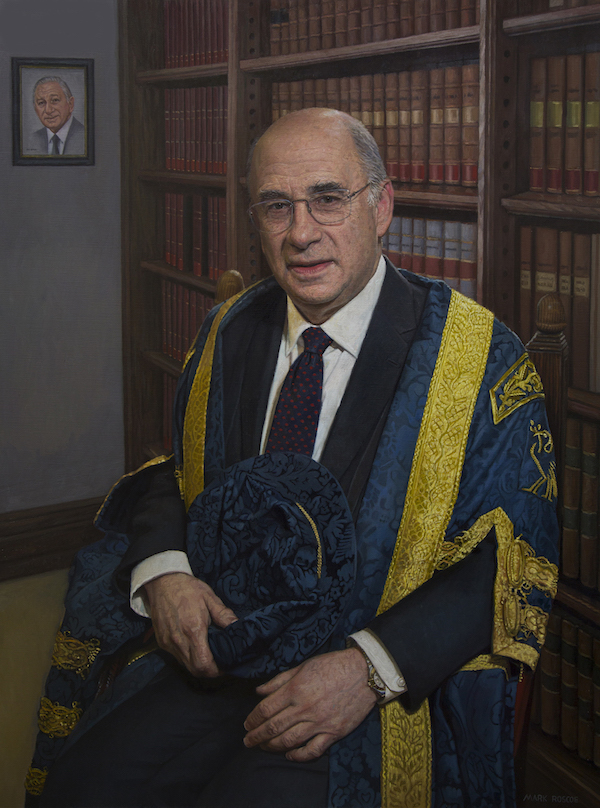 Mark  Roscoe, who was commissioned to paint this portrait, considered adding a liver bird to the bookshelves but felt that making a mythical bird look real might not have worked. Instead, the liver bird appears on the robes Sir Brian wears where it is holding liver seaweed.  A liver bird is a mythical creature and the symbol of Liverpool. This portrait is set in Sir Brian’s chambers in London, the painting Mark placed in the background is of Sir Brian’s father who had commissioned it posthumously and had been very touched by the result.  Serendipitously the two portraits mirror each other.
This portrait was commissioned by Liverpool John Moores University using the Royal Society of Portrait Painters’ commissions’ service.
Selecting the right artist was a two-stage process. The first consultation was to select a shortlist of artists who suited both the practical and the aesthetic needs of the brief.  The team used the advice of our consultant, Annabel Elton, and the visual examples of the artists’ portfolios at 17 Carlton House Terrace, to come up with a shortlist of five artists.  I the second consultation Sir Brian to come in to view those five artists and to make his decision about which one he felt most suited him.
The painting of Sir Brian Leveson was formally unveiled at the Chancellors Dinner in Liverpool Cathedral.
Sir Brian Leveson is an English Judge and past President of the Queen’s Bench Division and head of Criminal Justice. Sir Brian is probably best known for Chairing the public enquiry into the culture, practices, and ethics of the British press, prompted by the News of the World phone Hacking scandal.
Category: portrait commission, News1st August 2019
Share this post